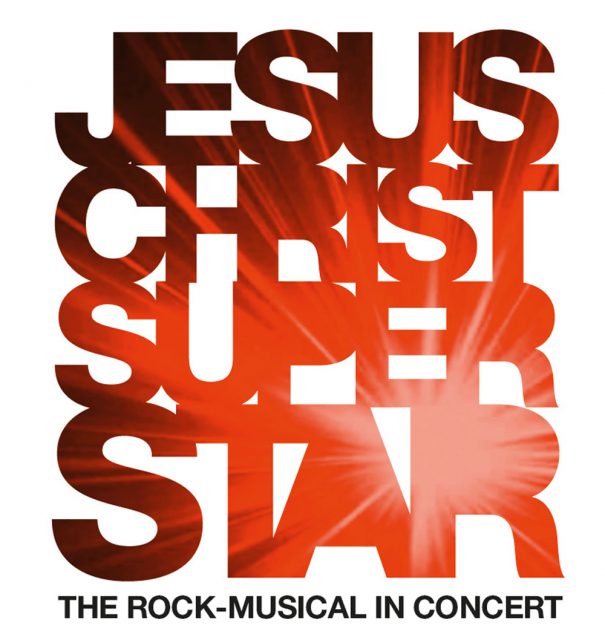 I have loved Jesus Christ Superstar since I saw the film as a young child and was hooked. I loved the story being told from Judas’ perspective and was amazed by the vocals of Ted Neeley and the late great Carl Anderson. This shaped my musical taste and love of great vocals. My search for other great singers in these roles led me to Drew Sarich.  The first thing I ever heard him sing was Gethsemane. Wow!! I was instantly in love with his voice and this grew the more I listened. I thought “I have to hear him do this live”, never thinking I would. This was late 2014. This Easter my dream came true and I saw it at the Ronacher Theatre, Vienna…. twice.

During this online search I also came across Sasha Di Capri. I admit I am not that familiar with his work, but I was very pleased that he would be playing Judas in the same show. I was looking forward to seeing them both, though can’t deny that Drew was the main purpose for travelling to Vienna to see a show that is played quite often in the UK. 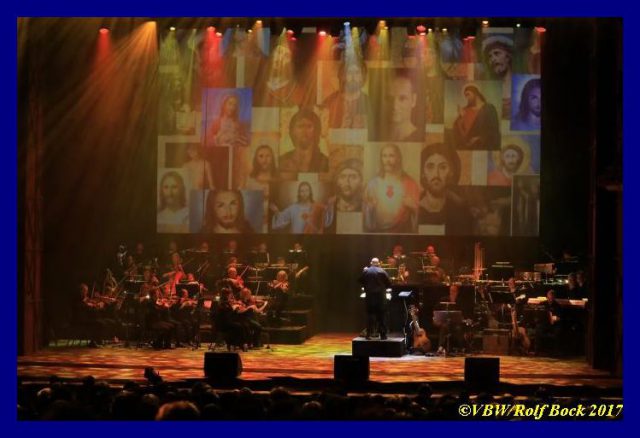 I knew the show was billed as a ‘concert’. To me this would suggest the songs are sung and simply that. No acting, no set, no storytelling, just singing. This was certainly not the case. The cast performed this Rock Opera fully, every artist played a role and did their character justice. The only difference I could see was that the orchestra (brilliant!) were visible on stage and the cast used handheld microphones. Other than that it was as much of a Stage Show production as any I have seen….and I’ve seen it a lot!

The show was performed in English. As this is my first language (and only language, though I am trying!) it was certainly a gift. Much of Judas’ role has rapid lyrics with some slang terminology and I can see this might pose slight difficulty for those listening with English as a second language, though I would not want to make this assumption. I can only comment as an English speaker and there was not one word sung that wasn’t clear and easily understood and that is of course a credit to all the performers.

So to the show itself. The Orchestra begin the Overture, doing justice to the original score and, for me, evoking memories of how this music has been such a big part of my life. The ominous opening gives way to a change in tempo when the cast flood the stage with energy and excitement. On an elevated gantry, Caiaphas and the Priests walked slowly and menacingly, watching the crowd, with Judas being the only one aware of them. Next thing Drew had appeared on stage and stood there, with majesty, all in white, as the main theme played. At that moment, he was Jesus! Sasha as Judas was dressed all in black, in stark contrast. Sasha sang in gravelly rock tones, again in contrast to Drew’s cleaner rock tenor voice. 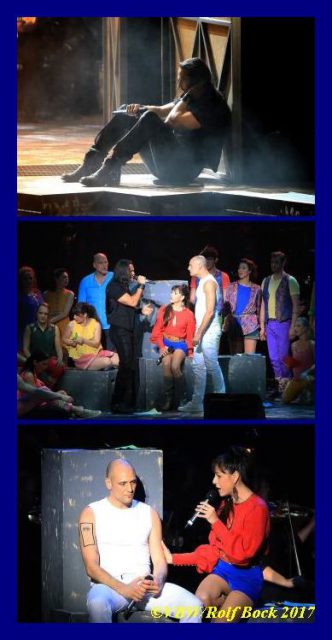 Judas during “What´s the buzz, the conflict at the end of “Everything´s alright” and Jesus confused, with Maria, copyright VBW/Rolf Bock

‘Heaven on their Minds’ leaves the audience in no doubt that Judas was not pleased with how Jesus seemed to be enjoying his celebrity status. I have seen this played very aggressively and angrily but, to me, Sasha was pleading with Jesus to stop getting carried away with his popularity for fear they would all be at risk.

The interaction between Drew and Sasha in these two key roles was exactly as it should be. Judas and Jesus were friends who trusted each other, but their priorities seemed to be moving in different directions. This conflict was clearly portrayed in the emotion of their vocal performances. The chemistry between both performers made this completely believable. Jesus appeared troubled that Judas was so angry with him and tried to make amends. There was a very touching moment when this seemed to have worked, but was immediately destroyed when Jesus went straight back to Mary. Judas clearly disapproved and left angrily, as if he felt he was wasting his time, leaving Jesus to appear confused by what had just happened.

Judas spends most of the show, as in all shows, on the periphery, observing what is going on. His disdain, mistrust and disappointment in Jesus building, Sasha becoming more and more intense. 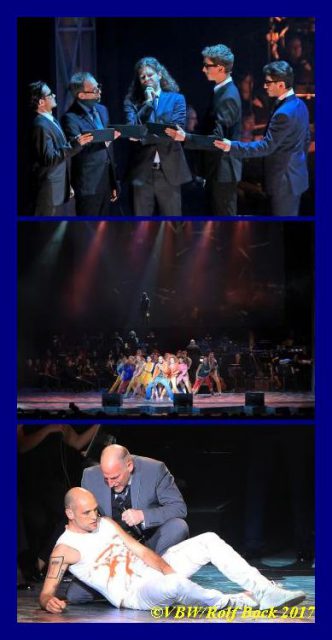 Caiaphas and the Priests are always a treat. The deep bass vocal of Caiaphas (Mark Sampson) in contrast with the falsetto of Annas (Kurosch Abbasi) always makes you sit up and listen. Very menacing. Their business suits and use of electronic tablets brought things into this century, another contrast with the colourful costumes of the followers and crowd and evidence that this story is timeless.

Simon Zealotes (David Rudriguez-Yanez) was full of enthusiasm and almost euphoric in his fervor telling Jesus how much he was loved by so many. He was like an excitable puppy seeking approval from his master and there really was a ‘buzz’!! This, to my mind, portrays mass hysteria at its best, exactly what Judas is so concerned about throughout. The dancers in this section were well choreographed and they were completely in time which was impressive, given the speed they were performing. I looked out for someone slightly out of step, but didn’t catch anyone.

Pilate (Marc Clear) sang about his dream in a gentle, lilting and conversational way which resonated through the theatre. I have not seen this performed as movingly for some time and his ‘concern’ about the content of this dream was admirably and naturally conveyed. Similarly, his efforts during the Trial to get Jesus to allow himself to be saved by Pilate were very moving and desperate. Skillfully done. 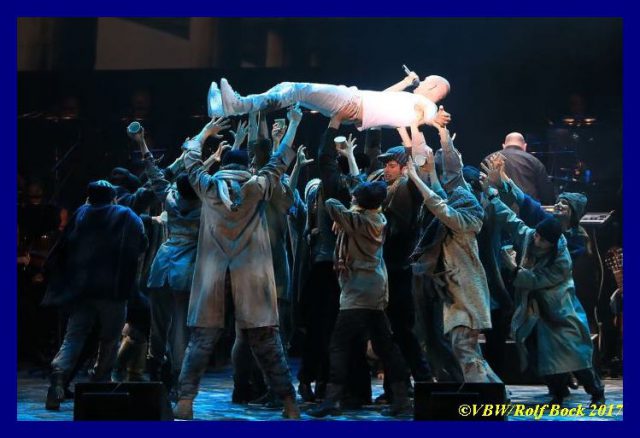 The Temple scenes, in my view, were a triumph with the energy of the orchestra and the performers. Jesus was furious that his Temple was being treated in this way and there was no doubt when Drew came on the stage that he was absolutely livid! Chilling!! His high screams will always leave the audience in no doubt as to who has the supreme vocal skills and ability. Personally, I find it unbelievable that he can hit such high notes with such power and accuracy whilst up in the air on his back!! Amazing.

Maria, during “I don´t know how to love him” and with Peter and the crowd during “Could we start again, please!”, copyright VBW/Rolf Bock

Marjan Shaki gave an impassioned and tender performance as Mary Magdalene through the whole show. I have heard dozens of versions of ‘I don’t know how to love him’ and it is always sung well. However, in my view she succeeded in portraying Mary with innocence and vulnerability when Jesus was around. I could believe she was a young woman who did not know how to cope with her feelings for a man far more important than her, unsure if she was worthy of him, but too afraid to find out. However, she was far more in control with other characters. She chastised Peter (Marco Toth) for denying Jesus and he was in no doubt he had been told off! Peter and Mary, along with the other disciples gave a wistful and compassionate performance during ‘Could we start again, please?’ when they were telling Jesus they wanted things to go back to better times and how sorry they were for what was happening to him.

Judas’ betrayal was played full of indecision and his inner turmoil was evident. His vocal ranged from frantic desperation to quieter distressed tones suggestive of a man trapped into a course of action he regretted but couldn’t stop.  He appeared then in turmoil until the confrontation between the two at the Last Supper. This part of the show is very emotionally charged and the two vocal big hitters face off almost taunting and goading each other. This performance did not disappoint and the table flying across the stage left you in no doubt that this would be memorable……and a little scary.

This of course was followed by Gethsemane. For all my years of searching, I have never come across anyone who can sing this song with as much emotion and power as Drew and I have seen it performed in many different ways and with many vocal arrangements. In Drew’s performance he goes through the whole range of emotions and his interpretation of this song will leave you breathless and in tears. Well…. I was. He has a range of tone and quality to his voice that I have not heard with anyone else, hence the trip to Vienna. The reaction of the audience was a lengthy standing ovation which the conductor watched, waiting for an appropriate juncture to restart the orchestra in order to move on.  Pure Class! 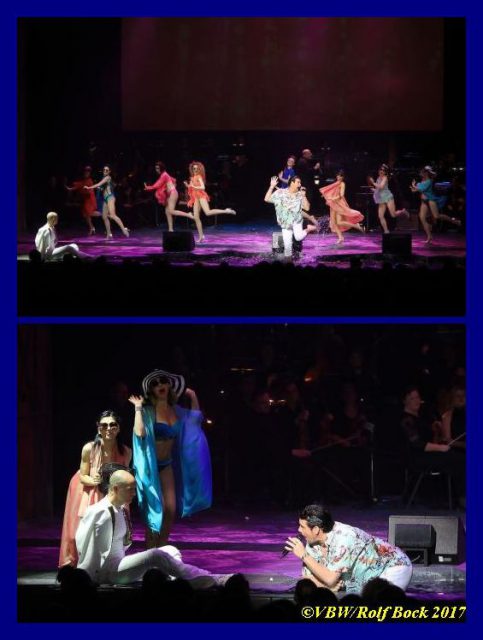 Herod’s Song is meant to provide some light relief during all the tragic drama to give the audience time to catch their breath, or so I have chosen to believe. The presence of the swimming pool payed homage to the original film and was, surprisingly, barely noticeable during the rest of the show. Herod himself (Andreas Lichtenberger) dominated while he belittled and mocked Jesus for believing he was the Son of God. I always hated this part as a child because I thought Herod was too cruel for ridiculing Jesus and would avoid listening to it. As an adult though I see the humor in this segment and it did, indeed, provide some light relief. Great interpretation!

Sasha’s vocal performance during Judas’ death was, in my view, tragic and heartbreaking. In my experience, having seen this show so many times, it is not meant to sound pretty. This is a man who is horrified by what he has done and is bereft by his own actions and their consequences. He has himself been betrayed by being chosen to do this awful thing. He cannot live with the horror of what he has done and dies by his own hand in an intense and dreadful way. This is meant to be distressing to watch and Sasha certainly did this justice.

So to the end. Every live show I have seen ends with Jesus being tied to a cross. The crucifixion here was more symbolic. We all know it happens, we don’t need to see it in all its gory drama. Drew was on the raised gantry with his arms outstretched by ropes and he spoke the scriptures. It usually ends here but this went one step further. Views may differ, but to me Jesus and Judas meet again and forgive each other for everything that has gone before. They both embraced and slowly walk away. Again, the relationship between the two performers was palpable, despite them being at the back of the stage and no words being sung or spoken. This was a wonderful ending to the show whilst the orchestra played John 19:41 which is a sad and poignant musical piece that brings everything to an end.

So in conclusion, this was a wonderful ‘concert’ and the production in Vienna did justice to the writings of a young British composer and Lyricist nearly 50 years ago. This interpretation and performance made it clear why this Rock Opera has stood the test of time and will continue to be performed the world over. I can’t wait to see it again, in Vienna.

The review was written for us by Sally Ann Criddle
The pictures are subject to the copyright of Rolf Bock and were kindly given to us – many thanks for that!